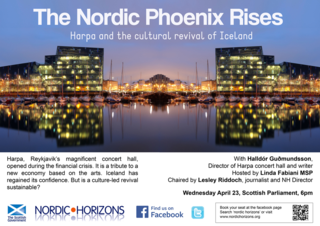 Harpa and the cultural revival of Iceland

The new centrepiece of the Reykjavik skyline is Harpa, a magnificent concert hall which opened in 2011 — against all the odds. In 2008 it was part of a doomed waterfront redevelopment including a 400-room hotel, luxury flats, shops, restaurants, and new bank headquarters. The quarter-built project went on hold once the financial crisis hit and two massive upright beams created a very visible “V” to the city. At one point campaigners argued it should stay that way as a reminder to the folly and greed that had nearly destroyed Iceland. But the government and council eventually decided to co-fund construction of the venue. The result is a home for the Icelandic Symphony Orchestra and Opera and an awe-inspiringly beautiful, shimmering glass cathedral – a tribute to a new economy built on what’s real, not leveraged or illusory. And with 90% occupancy of a 1600 seat stadium – a tribute to the support of native Icelanders for every type of arts event. Creativity in Iceland is very real. There are seven thousand creative arts businesses in this population of 320 thousand people – famous names like Bjork, and aspiring names like Dogma (the makers of provocative T-shirts like “What part of Eyjafjallajokull don’t you understand” and the uncompromising; “We may not have cash but we have ash”). Tourist companies like Icelandair were also quick to realise the crash made Iceland affordable at last and even the volcanic eruptions had a silver lining – demonstrating how close the island is to mainland Europe. Although Iceland has only 7% of Scotland’s population, this remote “basket case” appears to have regained its confidence – opting recently not to seek sanctuary in EU membership — and transformed its economy. This smallest part of the Nordics puzzling “bumble-bee” economy has resumed its ungainly, science-defying flight. According to Nobel Laureate and economist Paul Krugman; “Iceland broke all the rules again and yet things are not too bad.” But is a culture-led revival sustainable?

There was also an extended Question and Answer session with Halldór Guðmundsson where he answered questions on a range of topics from arts and culture to banking and energy. It lasted just over one hour and it’s a big download.

Listen to the Halldor Gudmundsson Q and A

Burning of Qur’an in Stockholm funded by journalist with Kremlin ties https://www.theguardian.com/world/2023/jan/27/burning-of-quran-in-stockholm-funded-by-journalist-with-kremlin-ties-sweden-nato-russia

Three years after Scotland was dragged out of the EU - what have we got to show for it? 🤔

Condemn the terror attack on synagoge worshippers in East Jerusalem. Alarmed by the rise in violence and high number of civilans killed in Jerusalem and the West Bank. Norway calls on all leaders and actors to prevent further escalation and protect civilians

“Please Note: The term ‘United Kingdom’ does not cover all of the UK.  These are the areas we do NOT cover:

What inspires us most about Dutch planning? They design for the future they want; with bold, ambitious projects that make the right choice the easy choice.