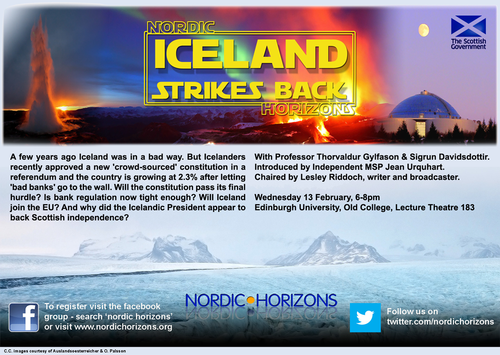 Here are two audio  files which are the recordings of each speaker. They are live recordings in situ.

The ‘Question and Answer’ session was recorded in the venue and is  1 hour 10 minutes in duration.

Professor Thorvaldur Gylfason used notes for this meeting. However, much of the material is covered in his presentation at a conference on “Women and Constitutional Futures: gender equality matters in a new Scotland”, on February 14/15, 2013, at the Royal Society of Edinburgh. A copy of that
presentation can be downloaded here.

In March 2012 a
packed Nordic Horizons meeting heard a fascinating talk from Icelandic
Economist Professor Thorvaldur Gylfason – the most voted-for member of the
Icelandic Constitutional
Council which drafted the country’s new “crowd-sourced” constitution. Since
then Icelanders have been to the polls in a six question referendum to
approve it and Iceland has clawed its way back to BBB+ credit rating and a
projected 2.3% growth rate after opting to let “bad banks” go to the wall (in
contrast to the UK and Ireland.) They’ve also paid back Scottish councils and
investors.

It seems this
Nordic nation of 300,000+ people is making (yet another) comeback. So will they
join the EU – or continue alone? Has the People’s Constitution passed its final
political hurdle? Is bank regulation now tight enough to ensure crisis can
never undermine the whole country again? And what prompted Icelandic President
Olafur Grimsson to end 2012 with a BBC
interview backing the prospect of Scottish independence?

Prof Thor joined us
for an Icelandic update together with Sigrun Davidsdottir – a London-based journalist working for the
Icelandic State Broadcaster Rúv whose blog Icelog
explores the financial “adventures” of her home. She’s also published her
second novel – Samhengi hlutanna, a financial thriller that takes place
in London and Iceland.

A cold and cloudy summer in Iceland, with well below average glacier melt (so far) might result in near zero net mass balance. Persistent snowfall in June, July and August.

The world looks on in pity and puzzlement as the UK Govt undermines those that it’s meant to protect and support. The price of Brexit ideology.

These are the headlines.Listen to the podcast at http://lesleyriddoch.com/podcast
Why are UK energy prices so high?
Is nationalisation the answer?
Truss or Sunak? For the Tory faithful it's still Johnson.
Should Scotland raise the age kids start school?

Show your #Nordic pride at this year´s Scandinavian Fest! Join a #fun-filled celebration on September 4th at 10:00 am. Discover the customs and history of #Denmark, #Estonia, #Finland, #Norway, #Sweden, and especially #Iceland! 🎉

Scotland’s first community-owned, passive-certified homes for affordable rent were created in Dumfries and Galloway by #NithValleyLeafTrust and @SoSCommHousing. Stunning & energy-efficient, it's a win-win for community and climate!
#MyLandScotland 🏴󠁧󠁢󠁳󠁣󠁴󠁿✨